Will Savage is promoted to Lieutenant.

Assistant Chief Chris Shaffer has been employed with the Town of Ocean City since June, 1987. During his tenure, he has served as a Firefighter/Paramedic, operational shift Lieutenant, and administrative Lieutenant. Assistant Chief Shaffer holds an Associates Degree in Emergency Medical Services.

Captain Bryan Bishop has been employed with the Town of Ocean City since April, 1989. During his tenure, he has served as a Firefighter / Paramedic and a supervisor with the rank of 2nd Lieutenant. Captain Bishop holds two Associates Degrees: Emergency Medical Services, and Mortuary Science.

Captain Joshua Bunting has been a member of the Volunteer Division since April, 1997, has previously served as Lieutenant, and is currently Vice President. He is an employee of the Fire Marshal’s Division, and is a certified Police Officer, Bomb Technician, Diver, and Hazardous Materials Technician. Captain Bunting holds two Bachelor’s degree’s one in Communications and the other in Fire Science.

Captain Rex Foxwell has been employed with the Town of Ocean City since May, 1984, and began his career as a seasonal Firefighter/Cardiac Rescue Technician. He has worked in the field as a Firefighter/Paramedic and has also served as a Field Training Officer and Instructor for the Department. Captain Foxwell graduated from the Peninsula General Hospital School of Radiological Technology.

Captain Eric Peterson has been employed with the Town of Ocean City since June, 1999, and has served as a 2nd Lieutenant in the field and as a training officer. Captain Peterson holds a Bachelor of Science Degree in Biology, and a Master’s Degree in Physical Therapy.

Captain Guy Rickards has been employed with the Town of Ocean City since May, 1989. He started as a 911 dispatcher and, in 1991, transferred to the position of Firefighter/Paramedic. Captain Rickards holds several national Fire Service Professional Board Certifications including Fire Officer II.

Lieutenant Will Savage has been a member of the Volunteer Division as a Fire Cadet since 1994. He is a Maryland Certified Emergency Medical Technician, a member of the Hazardous Materials Team, and a Certified Diver. Lieutenant Savage holds a Bachelor of Science Degree in Finance, and two Associates Degrees: Business Management and Hotel Restaurant Management.

Chief Larmore asks that you join the Ocean City Fire Department in congratulating these newly-appointed leaders. These exceptional individuals have & will continue to contribute by enriching the Department and our community through their commendable service. 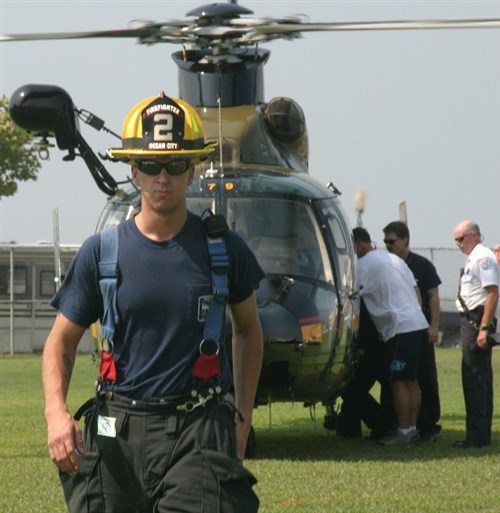